Harry Nilsson and Ringo Starr Get to “The Point” 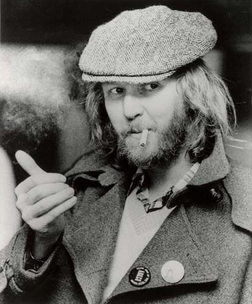 Gifted singer/songwriter. Former bank clerk. Beatles partying pal (who else would have encouraged a drunk John Lennon to wear a Kotex on his forehead?). Substance abuser. Shitty husband and father/Great husband and father. Gun control advocate. Stage fright sufferer. During his 52 years on this planet, Harry Nilsson was all of these things and more.

And while ironically, he penned big hits for other acts (“One” for Three Dog Night, “Cuddly Toy” for the Monkees), he had his greatest success as a performer with songs written by others (Fred Neil‘s “Everybody’s Talkin'” from Midnight Cowboy and “Without You” by Badfinger’s Pete Ham and Tom Evans).

Nilsson’s fascinating life and career were recently the subject of the great documentary, Who is Harry Nilsson (And Why Is Everybody Talkin’ About Him)?

But I was very excited to see that my favorite Nilsson project, the 1971 animated feature film, The Point, has come out in a “Definitive Collector’s Edition,” looking great and loaded with bonus materials and interviews.

The psychedelic fable—with plenty to teach both kids and adults—is based on a concept by Nilsson, who also wrote and sings the songs (including “Think About Your Troubles” and the insanely joyful “Me and My Arrow”).

It’s about a little boy, Oblio, who was born with a round head in a village full of pointy-headed residents. When his “disfigurement” gets him the bum’s rush outta town, he and his blue dog Arrow take a trip through the Pointless Forest before deciding to return home.

Oblio and Arrow encounter a “very stoned” Rockman, who dispenses advice with a jazz hipster’s patois.

Ultimately, Oblioe discovers…aw, hell, I’m not gonna ruin it for you. Just get the damn thing. You don’t even have to be high to watch it. Though, apparently, my parents and their friends The Gregos were during one of its early broadcasts, during which a very young Classic Rock Bob apparently watched with awe.

The unsung hero of The Point, though, is director/animator Fred Wolf, interviewed in the bonus features. In addition to wrangling a flaky Nilsson and working with multiple script revisions, he hand-drew the 28,000 drawings over 34 weeks which comprise the entire film. Fred Wolf…give that man an Ace Bandage Lifetime Achievement Award!

Ringo Starr is a great narrator, years before he put on that train conductor’s hat. And in a bit of trivia, Mike Lookinland is the voice of Oblio. He would later go on to break hearts (and expensive antiques) as Bobby Brady in “The Brady Bunch.”

Mom always said not to play ball in the house. 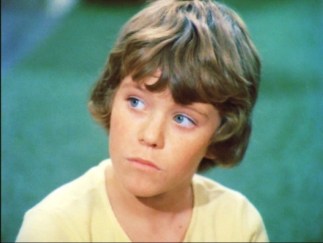 I am a passionate fan of classic rock (and related music) with nearly 30 years experience writing about it for daily/weekly newspapers and magazines. I am also the author of "Slippin' Out of Darkness: The Story of WAR." Available on Amazon!
View all posts by Bob Ruggiero →
This entry was posted in Classic Rock on TV, Movies and tagged Fred Wolf, Harry Nilsson, Mike Lookinland, Ringo Starr, The Point. Bookmark the permalink.