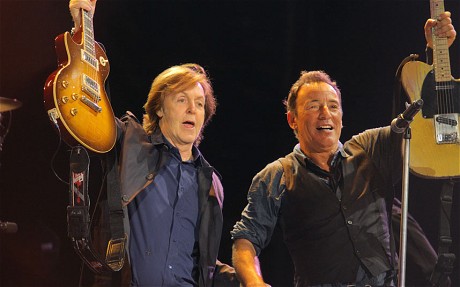 One of the things I love about VH1 Classic is their pretty solid schedule of screening rock docs and live concerts. The most recent one I caught showed highlights from the Hard Rock Calling 2012 shows held in London’s Hyde Park last July.

This show made some news last year when the police shut off the sound system at the point when the show had run eight minutes past the 10:30 noise curfew…cutting short as mini set with Bruce Springsteen and guest Paul McCartney.

I mean, who the fuck pulls the plug on Bruce Springsteen and Paul McCartney??? Even Boris Johnson, London’s mayor, was aghast.

And while the show’s lineup was varied with acts of all ages and musical genres, it was heavy hitting classic rockers who dominated the 2.5 hour VH1 Classic highlight show.

Iggy and the Stooges ripped through a furious “I Wanna Be Your Dog,” with the (of course) shirtless Pop—wanting a little closer contact with the audience—jumping off the stage to press the flesh at the audience barricades place well away from the lip of the stage on the muddy ground.

Ageless Creedence Clearwater Revival frontman John Fogerty offered up a somewhat tepid take on “Old Man Down the Road.” And will someone close to him please tell him that his current shade of hair coloring does not exist in reality.

Bruce Springsteen and the E Street Band, reports say, ruled the show. And the Boss got a lot of screen time here, whipping through a high energy “Because the Night.”

But two current songs from the Wrecking Ball album – “Shackled and Drawn” and “We Are Alive,” seemed weak in comparison, especially the latter. Maybe Bruce’s choice song selection was part of the deal, who knows? But the highlight here was a solo, solitary rendition of “Thunder Road” with just Bruce and his voice holding 80,000 Limeys captive and quiet. It was a powerful moment.

Later, McCartney joined him for renditions of “I Saw Here Standing There” and “Twist and Shout” to the obvious thrill of the audience and the delight of both men, with Springsteen saying he’d waited “50 years” for this moment. Paul, smiling and thumb-upping as usual, was the consummate showman. 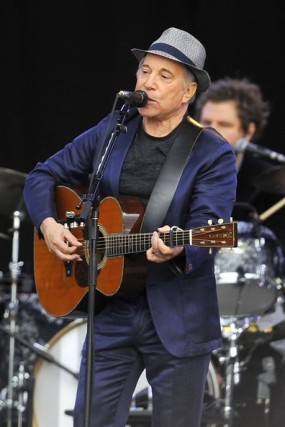 But the Oscar for Best Performance by a Classic Rocker goes hands down to Paul Simon. Sporting a snazzy fedora, the former Garfunkel carrier delivered a spirited “Diamonds on the Soles of Her Shoes” (with vocal group Ladysmith Black Mambazo and bandmembers who recorded the original version on 1986’s Graceland).

Simon then experimented successfully with different vocal tempos on “Late In the Evening,” explored the sound of silence with a fine “The Boxer,” and ramped up the party again with “Graceland” and “You Can Call Me Al.”

Loose-limbed and commanding, Simon was a joy to watch and made me want to go out and get his new DVD/CD Live in New York City. In fact, there’s a Best Buy right around the corner from here…

I am a passionate fan of classic rock (and related music) with nearly 30 years experience writing about it for daily/weekly newspapers and magazines. I am also the author of "Slippin' Out of Darkness: The Story of WAR." Available on Amazon!
View all posts by Bob Ruggiero →
This entry was posted in Classic Rock Live, Classic Rock on TV and tagged Bruce Springsteen, Hard Rock Calling, Iggy and the Stooges, John Fogerty, Paul Simon. Bookmark the permalink.