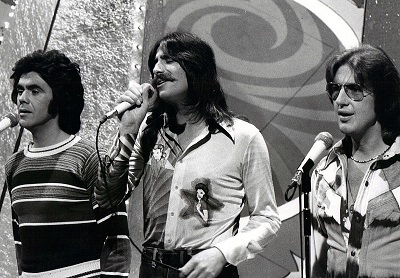 An excerpt from my interview with former Three Dog Night singer Chuck Negron for The Houston Press.

Read Part I and Part II.

“JEREMIAH WAS A BULLFROG!”

That odd, simple and urgent declarative sentence from Three Dog Night’s “Joy to the World” is one of the most famous classic-rock song openings of all time. But the man who sang it both then and now, Chuck Negron, says that what became the group’s most recognizable hit almost never even made it to vinyl.

“Some of the other guys in the band didn’t want to record it or put it out because they thought it wasn’t ‘hip’ enough. But they love it now… especially when they get that royalty check twice a year!” laughs Negron, the 71-year-old Negron laughs. “There’s something so positive about it. You can say to someone ‘Hey, I want you to have joy to the world! I want joy to the goddamn fishes in the deep blue sea!”

Released as a single in 1971 and written by singer/songwriter Hoyt Axton, “Joy to the World” eventually ascended to the top of the Billboard singles chart and stayed there for six weeks. It was just one of an amazing string of 21 Top 40 hits for the group, which included three vocalists (Negron, Cory Wells, Danny Hutton) and four musicians (Michael Allsup, Floyd Sneed, Jimmy Greenspoon and Joe Schermie).

But it wasn’t until fairly recently when Negron heard the song performed at his grandkids’ various school recitals that he grasped its greater significance. “I thought ‘We’ve made it! We’ve finally arrived! We’re in the school system!” he chortles. “It gave me a warm fuzzy. And it’s had a life of its own, way beyond our version.”

Read Part I and Part II.

I am a passionate fan of classic rock (and related music) with nearly 30 years experience writing about it for daily/weekly newspapers and magazines. I am also the author of "Slippin' Out of Darkness: The Story of WAR." Available on Amazon!
View all posts by Bob Ruggiero →
This entry was posted in Three Dog Night. Bookmark the permalink.