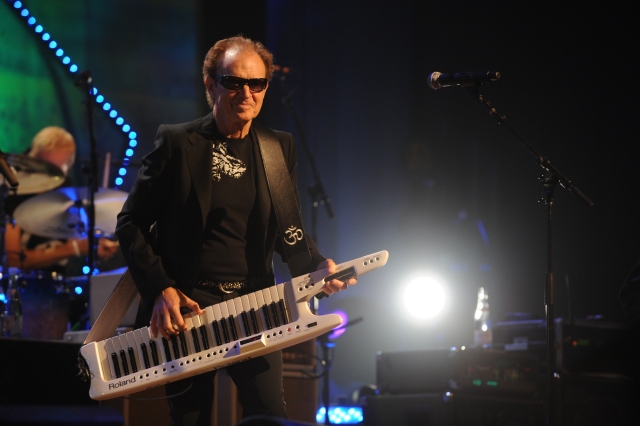 There aren’t many more solid instances of one singer being so clearly connected to one song in the classic rock canon than Gary Wright with “Dream Weaver.”

The 1976 single – recorded with all synthesizers – reached #2 on the Billboard chart, has been a constant presence on radio and in movies (from Wayne’s World to Toy Story 3), and is easily Wright’s best known number.

In fact, “The Dream Weaver” has also become a nom de plume for Wright, the URL of his official website, and the title of his autobiography (Dream Weaver: Music, Meditation, and My Friendship with George Harrison, 256 pp. Tarcher, $26.95).

But the song – about God and inspired by Wright’s intense devotion to Hindu religion and teachings – almost never made it on the album that would eventually bear the same name.

“It was the last song I put on the record, and I thought it was a nice little thing, but didn’t put any credence in it. I didn’t think it would be [a hit], but it took on a life of its own,” Wright says today. “And I feel very blessed and fortunate that I was able to have written a song that reached that kind of status.”

In fact, Wright says that he has gotten e-mails over the years from people telling him that they were suicidal, but ultimately changed their thoughts after hearing the song’s message of cosmic hope.

“I’m not saying that to glorify myself or say I’m some kind of spiritual giant, but I’m happy to have been an instrument in helping these people,” he offers. “Writing that song was part of my own spiritual journey. And with all synthesizers, when it came out, it was just such a different sounding kind of record.”

“Dream Weaver” and the record’s other hit single, “Love is Alive” weren’t Wright’s first brush with success either. He was the co-vocalist/keyboardist/songwriter with the well-regarded late ‘60s band Spooky Tooth (with featured the U.S.-born Wright with four Brits). The band was set to take off after the commercial and critical success of their sophomore release, 1969’s Spooky Two.

But in one of the more tragic career blunders in classic rock history, the band was coerced into making their next effort – released the same year – a collaboration with French electronic artist and “found object” composer Pierre Henry called Ceremony. The concept effort took the form of a largely-instrumental church service, and the hideous cover featured a drawing of a man with a nail in the back of his head and a trickle of blood down the neck.

The only nail, however, relating to the band was the one Ceremony put in the coffin of their rising career. Wright left the band, which released one more album, and would reunite live and record sporadically through the decades.

“That was a really, really bad call by the record company. And Ceremony was mostly [Henry’s] electronic music. Our contributions were minimal because his stuff was mixed really high,” Wright says. “I already had a bunch of songs written for the next Spooky Tooth record that ended up on my first solo album. The next [Spooky Tooth record] could have been a big success.”

As the title indicates, Wright’s book is about more than just his musical career. Some of the best passages describe his deep and lasting friendship with George Harrison.

Initially bonding over music (Wright played on the ex-Beatles first solo effort, All Things Must Pass), the two began to talk about more religious and spiritual matters, in particular the brand of Hinduism and guru teachings of which Harrison was a devotee.

George Harrison at the Kali Temple in India.

“George turned me on to that whole world, and it was and is such a big part of my life. And it was important for me to include that in the book,” Wright says. “He was the catalyst that started the whole thing, but a lot of the studying and meditating I did on my own.”

In fact, Harrison would invite Wright to seminars and pilgrimages to India, during one of which he also met Indian sitar master Ravi Shankar. Wright would make other trips on his own to the country.

The friendship between Harrison and Wright would last until Harrison’s 2001 death. It produced at least one songwriting collaboration, “Discover Yourself,” which is available as part of the e-book’s publication.

“When you’re philosophically aligned in a friendship to someone else, you grow a lot closer. And we had that. George was a deep and wonderful human being and amazingly creative,” Wright says. “He was also really, really funny. A lot of people don’t know that side of him.”

Gary Wright’s main instruments have been the keyboard and synthesizer – his Dream Weaver record featured no guitars, save for a brief bit on one song (though he wrote the title track on an acoustic guitar). Still, even he has been impressed at the advances in musical technology since the ‘70s.

“It’s quite amazing what’s going on now. But I think some [musicians] have gotten too wrapped up in the technology part, and songwriting has suffered,” he believes. “People [today] may have amazing voices, but I miss the artists with unusual lyrics and melodies like Jackson Browne, Joni Mitchell, and Crosby, Stills and Nash.”

In addition to the Dream Weaver book, Wright has released some digital-only music, including a new compilation, Best of the Best, and a box set of five albums he did for Warner Brothers. He also embarked on a short, “Storyteller”-style tour with music and stories.

This interview originally appeared in The Houston Press.

I am a passionate fan of classic rock (and related music) with nearly 30 years experience writing about it for daily/weekly newspapers and magazines. I am also the author of "Slippin' Out of Darkness: The Story of WAR." Available on Amazon!
View all posts by Bob Ruggiero →
This entry was posted in Gary Wright and tagged Gary Wright, George Harrison, Spooky Tooth. Bookmark the permalink.