Graham Nash Has Some Wild Tales to Tell

One of my all-time favorite interview subjects over the years has been Graham Nash. Engaging, open, wry, and blunt, it’s no wonder he’s long been the glue that holds the sometimes-fractious CSN (and sometimes Y) together. Here is my most recent talk with him about  the big CSNY box set that came out awhile back. I also highly recommend his memoir, Wild Tales.

“We knew it was something special,” Graham Nash says. “No one had done a tour like that, in that many big venues. But I felt we were up to the task. We could all play and sing, and there were four of us. With four intense egos!”

Today, massive football stadium tours by rock’s major acts are taken for granted. But many years ago it hadn’t even been attempted. While the Beatles and Stones had done the massive gigs as one-offs, it was a reunited Crosby, Stills, Nash and Young who took the plunge first.

Their fabled 1974 tour encompassed 31 shows in 24 cities in three countries from July through September, with the group presenting nearly 80 songs played in various personnel combinations – a quarter of which hadn’t even been released at that point but would find their way onto later group, solo, and duo records.

CSNY on the 1974 tour. Photo courtesy of Rhino.

And the jaunt has passed into rock legend. David Crosby dubbed it the “Doom” tour for its manic mix of music with huge highs and lows, drugs, crazy financial expenditures, and the aforementioned egos.

A handful of those shows were recorded. And while shitty bootlegs have circulated for years, the massive box set simply titled CSNY 1974 (Rhino) has 40 live songs over three CDs, as well as a DVD with rare video footage shot during two of the shows, and a thick booklet with essays, photos, and liner notes.

The project – like other archival sets from the group – was helmed and produced by Graham Nash himself and Joel Bernstein, with Stanley Johnson as sound engineer. And it took four years to put together.

“It was an absolute labor of love. And we set a high bar both musically and graphically,” Nash says. “Our original intent was to present the best possible performances from this tour. And that’s why ‘Carry On’ isn’t on there. We just couldn’t find a performance that stood up to the other songs.”

Backstage at Roosevelt Stadium on the 1974 tour, with Richard Nixon on the tube. Photo by Henry Diltz

The songs that did make it on the box run the gamut from CSN (and/or Y) warhorses (“Wooden Ships,” “Suite: Judy Blue Eyes,” “Déjà Vu”) and solo songs (“Love the One You’re With,” “Old Man,” “Prison Song”), and rarities (“Grave Concern,” “Myth of Sisyphus,” “Fieldworker”). Some others, audiences were hearing for the first time anyplace.

“So many of the songs are relevant even today, like ‘Immigration Man’ and ‘Military Madness.’” Nash offers. “Even ‘Goodbye Dick!’”

The last song is perhaps the most ultra rare CSNY tune – a bizarrely funny, one and half minute, seemingly improvised ditty by Neil Young in which he celebrates the then-recent resignation of Richard Nixon. Ironic, since Tricky Dick himself is back in the news with the recent release of more damning audiotapes. It was performed only once, and is captured on the box set.

While very few “live” records by any band are actually live, Nash says he wanted to keep the music of CSNY 1974 as real as possible, but does cop to a little tweaking.

“There is not one single overdub on the entire album,” he says. “Did I tune certain things? Yes. And if I could find a note or phrase that make a song better, I took it from another performance. But it’s very true to us. Anybody who is curious about who CSNY was or is, they can go to that box set.”

And while Nash says he doesn’t have a particular memory of that show, playing to huge, huge crowds was not intimidating. “We had already played Woodstock, and that was nearly a half a million people,” Nash says. “So playing to 40 or 80,000 people wasn’t that big a deal to us.”

And while all members have contributed songs to the group pot over the past nearly five decades, it’s Nash who – as Crosby told audiences during the last tour – “writes the songs that the world knows by heart and sings along with.”

Those would be chiefly “Teach Your Children,” “Our House,” and “Just a Song Before I Go” – also some of the band’s best-known and commercially successful tunes. 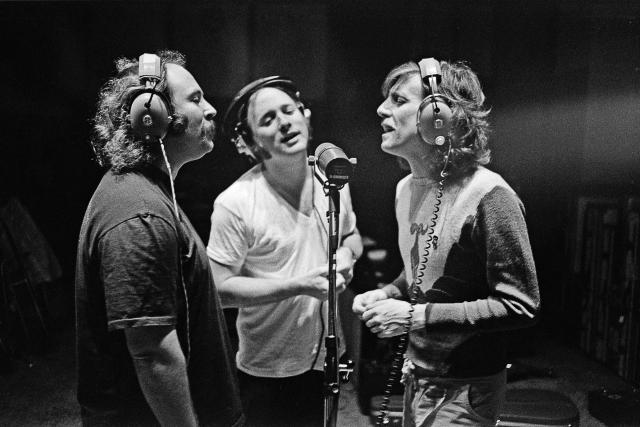 “Teach Your Children” in particular, Nash feels, will “be around long after our physical selves are gone.” And two incidents – one years ago, one recent – drove that point home to him.

“A few years back, a friend called me, and he was sitting in a small coffee house on the top of a mountain in Katmandu in Nepal, and the song came on in the café. In Nepal!” Nash says.

“And I was in an Apple store in Italy, and one of the employees rushed up to tell me he’d just been listening to the version on CSNY 1974 and how much it meant to him. To think I wrote a song that touches so many heart and minds and has for so long…that’s a thrill as a writer.”

And while he readily admits having fun with various substances for many years, Nash’s indulgences never derailed the band, hurt the music, or caused bizarre behavior.

So, as the man in the middle, how many times over the years has the long-suffering Nash thought, “Am I the only sane one who just wants to make music?”

“Oh, I always think that. I have from day one actually!” Nash says. “I mean, I’m English. My country was devastated twice by war in 80 years. And there were times you didn’t know if your house was going to be still standing or your friends were going to be alive. So you just want to get the job done because you don’t know if it’s every going to end.”

I am a passionate fan of classic rock (and related music) with nearly 30 years experience writing about it for daily/weekly newspapers and magazines. I am also the author of "Slippin' Out of Darkness: The Story of WAR." Available on Amazon!
View all posts by Bob Ruggiero →
This entry was posted in CSN & CSNY and tagged CSN, CSNY, David Crosby, Graham Nash, Neil Young, Stephen Stills. Bookmark the permalink.

1 Response to Graham Nash Has Some Wild Tales to Tell