One of the more egregious omissions from the Rock and Roll Hall of Fame (now that Chicago, Yes, ELO, and Journey are in) has got to be Bad Company. Here’s an interview I did with lead singer Paul Rodgers last year just prior to their most recent tour about the band’s legacy, reformations, and that little ol‘ pyramid in Cleveland…

Fans of heavy ‘70s rockers Bad Company were undoubtedly thrilled by the recent announcement that the three surviving members — Paul Rodgers (vocals), Mick Ralphs (guitar) and Simon Kirke (drums) — would be re-forming under the name for a co-headlining summer tour with Joe Walsh. Bassist Boz Burrell died in 2006.

But it was with understandable head-scratching when two weeks later, Ralphs announced that he would indeed not cross the pond to the U.S. for the trek, claiming he was “just not feeling up for” the extensive travel. Instead, Black Crowes co-founding guitarist Rich Robinson was announced in his stead.

The turn of events came as a surprise – especially to Ralphs’ bandmates.

“Well…we were all gobsmacked the day after we announced the tour, Mick announced he wasn’t going to do it! It left us in a tricky position, but the show must go on. Though it would have been nice to know ahead of time!” Rodgers says.

“But Mick was very apologetic,” continues the singer. “He said he took one look at the schedule and said he couldn’t do it. And I understand. The travel is grueling. We love being onstage, but the getting there, and the other 23 hours, that can be tough.”

Rodgers says that as soon as he heard about it, he thought Robinson would make a great replacement, having met and played with him at a Jimmy Page tribute at Paul Allen’s Experience Music Project.

“I said we should do something together sometime. Little did I know how soon that would be!” Rodgers laughs. “But I think it will be an interesting energy.”

The rest of the band this tour will also include former Heart member and Rock and Roll Hall of Famer Howard Leese (guitar) and Todd Ronning (bass), both longtime members of Rodgers’s solo group.

And while the five will woodshed on playing the must-play Bad Company tunes like “Can’t Get Enough,” “Feel Like Makin’ Love,” “Rock ‘n’ Roll Fantasy,” “Seagull” and – of course – “Bad Company,” Rodgers says he hopes to dig a bit deeper into the catalog on this tour with tracks like “Man Needs Woman” and “Leaving You.”

Amazingly, this is the first official live release ever from Bad Company, coming on the heels of reissued/remastered/expanded versions of their studio records.

Rodgers says that Rhino Records picked the gigs and sent them to him for approval. “I do remember that Houston show…what a great crowd,” he offers. “But even I can’t believe it’s our first live record. We just never took the trouble to do it! I always said we should be recording and filming things back then!”

Promising that some familiar songs will have slightly different arrangements, Rodgers adds that he wants to take some tunes to a “different place.”

“You always play the bones of the song, but there’s an opportunity live to take it somewhere else,” he says. “And that’s the beauty of music and the relationship between band members and the audience.”

When not occasionally reconvening Bad Company (or, years ago, fronting Paul Rodgers + Queen), Rodgers has a busy solo schedule. His last record was 2014’s The Royal Sessions, which featured ten handpicked blues and soul cover songs like “I Thank You,” “I’ve Been Loving You Too Long (To Stop Now),” “That’s How Strong My Love Is” and “Born Under a Bad Sign” at Memphis’s historic Royal Studios.

And while a lifelong fan of blues and soul, Rodgers does not see what he does with Bad Company (or, previously, with Free) as all that different. “I see rock as a soulful genre. That’s what I want to infuse into it; that’s what’s there for me. I like to do soul music in a rock fashion,” he says – before referencing a contribution from his temporary guitarist. 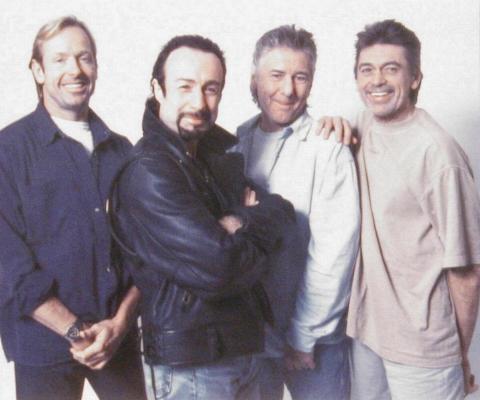 “When I heard the Black Crowes do ‘Hard to Handle,’ that was it. As long as it has feel and touches you whether it’s blues or soul or rock and roll…that’s what I’m looking for. If it’s cool and it swings and it’s got a groove.”

To that end, Rodgers is itching to get out and play live, which he likens to running a race in sports in that you get “one shot” to achieve what you want to and there are no redos.

For this tour, subtitled “One Hell of a Night,” Bad Company is paired with Joe Walsh, whose offhand comment named the tour. Rodgers says that he and Bad Company have shared co-headlining bills with other classic-rock acts like the Doobie Brothers and Lynyrd Skynyrd, and they’ve always worked out great.

I met Joe back when he was with the James Gang,” Rodgers recalls. “We were at a party together having a drink, and Joe told me that he was tired of the music business and wanted to go to the country and just sit back. But he said he’s been asked by the Eagles to join, and did I hear of them? And I said I did and they were a good band. Next thing I heard, he had joined the band!”

After this tour ends, Rodgers says, he is working with some collaborators and has “written a lot of songs,” but doesn’t want to tip his hand to the project specifics. He will also continue to work with his solo group, and would consider writing his memoirs if he could “just sit on a beach in Hawaii and talk to a tape recorder.”

Finally, there is legacy to consider. For while this year’s inductees into the Rock and Roll Hall of Fame included some long-overdue classic rock acts, Bad Company is on a short list others who should be enshrined (along with Yes, the Doobie Brothers, Journey, Electric Light Orchestra, The Cars, Moody Blues, Jethro Tull…)

And while the voice of Bad Company first dismissed the notion, he’s come around.

“Ahmet Ertegun used to come to dinner at my house when he was helping to [start the Hall] and talked about Bad Company being in,” Rodgers says. “I told him that I thought this was rock and roll and I didn’t want to be in any museum!” Rodgers laughs. “Now, I have changed my mind. It would be nice to be in it!”

I am a passionate fan of classic rock (and related music) with nearly 30 years experience writing about it for daily/weekly newspapers and magazines. I am also the author of "Slippin' Out of Darkness: The Story of WAR." Available on Amazon!
View all posts by Bob Ruggiero →
This entry was posted in Bad Company. Bookmark the permalink.