To the members of the band Steppenwolf, it was just one track out of 11 recorded for their 1967 self-titled debut LP. And one that didn’t seem to get any more or less reaction when played in concert than any other song did.

But after the tune appeared as the seemingly perfectly-suited theme for the seminal 1969 hippie biker flick Easy Rider, its profile began to grow. The song would become the band’s signature number, and be used in scores of films, TV shows, and commercials—most recently in an ad for Mercedes shown during this year’s Super Bowl.

But for lead singer John Kay, it wasn’t until decades later that the real fame and impact of “Born to Be Wild” hit him. And it had nothing to do with record sales or soundtracks.

“I was in Burma on a trip and after 10 days, my guide asked me what I did for a living. I said I was a musician and told him and the name of my band, but there was no recognition,” Kay recalls today. “But after I mentioned ‘Born to Be Wild.’ His eyes widened and he got excited and smiled and told me ‘Every bar band in Yangon must know that song or they won’t be hired!’”

Kay recalls similar incidents in places as far-flung as Botswana and Scandinavia. He was even presented with a 45 record that was specially pressed for African fighters to use as inspiration during the Angolan Civil War. That’s not surprising, given his frequent travels over the years with his wife on behalf of their Maue Kay Foundation, which supports individuals and organizations who fight for environmental, wildlife, and human rights causes around the world.

Steppenwolf in 1971. John Kay is in the center.Wikimedia Commons via ABC/Dunhill Records

It’s those causes – not music – that move the 73-year-old Kay today. He and the current incarnation of Steppenwolf (of which he is the only original member) only play a dozen or so dates a year. But to celebrate the 50th anniversary that debut LP, they will be more active in 2017 and 2018.

Taking their name from the Herman Hesse novel (which was de rigeur reading for the ‘60s counterculture), the original Steppenwolf’s run lasted until 1972, producing six albums and other hits including “Magic Carpet Ride,” “Sookie Sookie,” “Rock Me,” and “Hey Lawdy Mama.” Various legit reunions, questionable lineups, and a Kay solo career followed, before things coalesced as John Kay and Steppenwolf in the early ‘80s.

But while their hits could be classified as party anthems, Steppenwolf’s deeper cuts also tackled weightier issues about hard drugs (a cover of Hoyt Axton’s “The Pusher,” which also appeared in Easy Rider), soft drugs (“Don’t Step On the Grass, Sam”), and social/political issues of the day (“The Ostrich,” “Move Over”).

Their longest effort in this vein is the 1969 concept album Monster, about the tumultuous state of politics and culture America. It bombed at the time, but has found renewed interest for its eerily prescient subject matter that a writer for Rolling Stone discovered and wrote about during the 2008-era economic crisis.

“There’s a strong emotional response to that song, it’s 10 minutes and we have a film to goes along with it,” Kay offers, before going into a detailed and lengthy side polemic.

“We have to speak out with like minded tribal members. What is a democracy if you’re powered into silence? We are unfortunately a tremendously divided country right now,” he says, voice rising. “In the end, for me, as long as we deal with blue and red states instead of the United States, our enemies are grinning and rubbing their hands. Lincoln said a house divided against itself cannot stand. We see each other as enemies instead of fellow citizens. We cannot treat democracy as a spectator sport. And we have Mr. Trump to thank for a new, energized populace.” 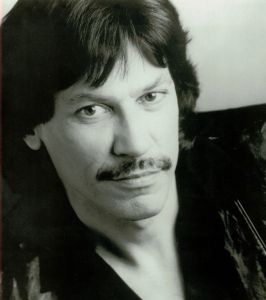 John Kay back in the day. Courtesy of Paradise Artists.

Another Steppenwolf deep cut that could be ripped from today’s headlines is “Renegade.” It’s about the plight of refugees, an area that Kay has intimate personal experience with.

Kay was born Joachim Fritz Krauledat in East Prussia, Germany toward the end of World War II, and after his father died fighting in Russia. Less than a year old, his mother took her newborn son and escaped first to East Germany, then West Germany when he was four during a covert midnight operation, eventually settling in Canada.

“I know how hard it is to leave all you’ve known in the hopes of finding a better life somewhere else,” Kay says. “The refugee crisis is an enormous problem not only now, but will become even more important and prevalent. Europe is having a [reckoning] with all the refugees from the Middle East and west Africa, and they cannot absorb everyone into their economies.”

He adds that the current climate of immigration in America is neither in step with the ideals presented by American history nor represented in that large lady with the crown and the torch standing on that island in New York harbor.

“We shouldn’t assume you are guilty of terrorist or planning it just because you come from a certain place. But we do need to be vigilant, and a country has an obligation to its citizenry to control its border,” he says. “It’s a very difficult balancing act. I don’t agree with either sides’ extremism.”

Regardless, the current lineup of Steppenwolf  – Kay (lead vocals), Michael Wilk (keyboards), Ron Hurst (drummer), Danny Johnson (guitar), and Gary Link (bass) will play a variety of hits, covers, and deep cuts. And – of course – “Born to Be Wild.”

The song, and its “heavy metal thunder” was written by Mars Bonfire, the stage name of original Steppenwolf guitarist Dennis Edmonton. Although that Red Planet would play another role in the song’s legacy.

“Years ago, I was on an African trip and was kind of off the grid for awhile. When I got home, there were all these messages congratulating me on ‘the Mars thing,’” Kay laughs. “It turns out that when one of the Mars Rover landed on the planet during a mission, the door opened and two robots came down the ramp – and they were playing ‘Born to Be Wild!’”

I am a passionate fan of classic rock (and related music) with nearly 30 years experience writing about it for daily/weekly newspapers and magazines. I am also the author of "Slippin' Out of Darkness: The Story of WAR." Available on Amazon!
View all posts by Bob Ruggiero →
This entry was posted in Steppenwolf, Uncategorized and tagged John Kay, Steppenwolf. Bookmark the permalink.