While he thinks the word “crazy” might be stretching it a bit, guitarist Wolf Hoffman does understand that what he did at Germany’s 2017 Wacken Open Air Festival (the world’s largest annual gathering of heavy metal fans) might have some questioning his sanity.

That’s where his band Accept staged an ambitious show divided into three parts: A short set with just the group, a middle section with different musicians where Hoffman debuted his instrumental work “Headbanger’s Symphony” with a full orchestra, and a final segment where his bandmates returned for lengthy set of more Accept songs, retaining the orchestra. It’s all documented on the 2CD/1DVD set Symphonic Terror: Live at Wacken 2017 (Nuclear Blast Records).

“Well, I wouldn’t go as far as to say ‘crazy,’ but I initially thought the idea was a bit ambitious! Bordering on crazy, of course!” Hoffman laughs. “it turned out to be pretty stressful, but it worked super, super well. We could not have asked for a better reception or a better audience. And the whole thing went down without a glitch. Though it was nerve-wracking at first!”

In addition to the show being the first time Accept had ever played with an orchestra – an increasingly common practice for hard rock, heavy metal, and prog bands – he was a bit worried how the beered-up, rowdy Wacken crowd would accept “Headbanger’s Symphony.”

“I always thought my solo stuff was sort of predestined to be played with an orchestra because it is classical music. Then when we got the invitation from Wacken to do it, I thought it was my chance!” Hoffman says

“And I metaled it up enough for a festival audience, which has a certain party atmosphere. You don’t want to bore them, so I stayed away from the slower stuff and long intros,” he continues. “Then we figured well, why don’t we play some Accept songs with an orchestra since it’s there. So it evolved!”

What Hoffman says he didn’t want to do with the Accept/orchestra portion, was simply tack on some strings and brass instruments to their material as an afterthought. He recalls hearing an orchestra’s take on Deep Purple’s “Smoke on the Water” where the musicians simply played the famous guitar riff and he found it wanting. He started sifting through the Accept catalog to see what would work more organically. So mostly guitar-based songs like “Restless and Wild” and “London Leatherboys” were out of consideration, but “Fast as a Shark” and “Balls to the Wall” were in.

“I tried to pick the songs where I thought the melodies would sound good when played by an orchestra. And I was pleasantly surprised at how they sounded!” he offers, while giving full credit to collaborator Melo Mafali for his orchestral arrangements.

The Germany-bred Accept formed in 1976, but came to worldwide attention and U.S. heavy metal popularity on the strength of a triumvirate of albums from 1982-85: Restless and Wild, Balls to the Wall, and Metal Heart.

The single “Balls to the Wall” became their signature song. New records and tours, lineup changes, breakups, and reunions have happened over the years. That includes the comings and goings of the bulldog-like vocalist Udo Dirkschneider (who also fronted his own group, U.D.O.). But original members Hoffmann and bassist Peter Baltes remained constants.

Accept returned in a big way in 2009 with the addition of the powerful vocal gravel of Mark Tornillo (ex-T.T. Quick) as front man, and the next year released Blood of the Nations. Their last studio record was 2017’s Lords of Chaos, though Hoffmann says they hope to finish in new one in the studio by the end of this year. 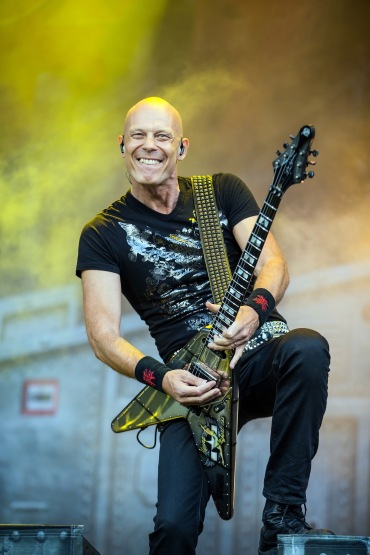 As for his musical relationship with Tornillo, something that was fairly new when I spoke with Hoffmann in 2010, he says it’s only been great.

“I think we’re just growing together more and more, and we’ve done hundreds of shows together,” the guitarist says. “He came right out of the gate and was a perfect fit for us from the first day on. It was a great match, and when a great match works, you don’t question it!”

Another in addition to Hoffmann, Tornillo, Uwe Lulis (guitar), and Christopher Williams (drums), the band will use a new bassist for the upcoming short “Symphonic Terror” tour with the Orchestra of Death throughout Europe and Russia this spring. After more than four decades, Baltes abruptly quit Accept of his own accord last November. And while Hoffmann says it left him “heartbroken,” he admits to feeling some pressure as the sole original or classic lineup member now left.

“Yeah, there is a little bit. But I don’t let it get to me. We are just going to continue full force,” he says. “It’s a sad event, but you have to roll with the punches and move forward. And as long as I have the fire and energy with me, I’ll continue.”

Though (along with wife/band manager Gaby) will also have to keep an eye on expenses for the “Symphonic Terror” jaunt. Which – as pointed out to him – will surely not be small while lugging a full orchestra across many borders.

“That’s very true! I think I’ll have to treat them as cargo and just drop them off at the shows!” he laughs. “No per diems!”

This article originally appeared on HoustonPress.com

I am a passionate fan of classic rock (and related music) with nearly 30 years experience writing about it for daily/weekly newspapers and magazines. I am also the author of "Slippin' Out of Darkness: The Story of WAR." Available on Amazon!
View all posts by Bob Ruggiero →
This entry was posted in Accept and tagged Accept, Heavy metal, Wolf Hoffmann. Bookmark the permalink.