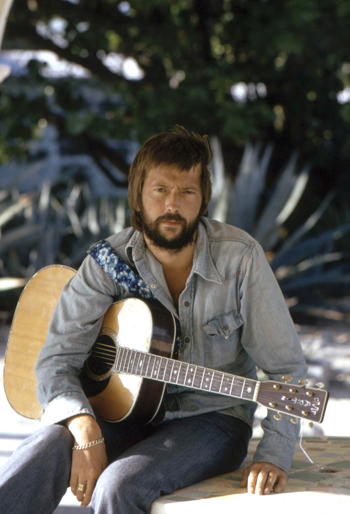 In the fall of 1974, Jamie Oldaker was a 22-year-old drummer riding in the backseat of a car with a girl he met at a club. And he wanted to get to know her a little bit, uh, better.

Tooling down the streets of his native Tulsa, Oklahoma, a song came on the radio with a lazy, syncopated beat and lyrics about cop killing. “I Shot the Sheriff” was the single from Eric Clapton’s new record, and it made the electrified Oldaker bolt up.

“I said to her ‘Hey, that’s me! That’s me playing on that record! But she didn’t believe me. Nobody did. They said ‘If that’s you, then what the hell are you doing here!” Oldaker laughs four decades later. “So I still got no girl and no respect. But I did fulfill my dream playing on a hit record.”

Well, if that chick is still around, all she has to do is check out the liners notes on the new Eric Clapton box set Give Me Strength: The ‘74/’75 Recordings (Polydor) to see that Oldaker was telling the truth.

The 5CD/1 Blu-ray set offers remixed, remastered, and expanded versions of the albums 461 Ocean Boulevard, There’s One in Every Crowd, and the live E.C. Was Here. There is also a treasure trove of outtakes, alternate versions, live cuts, and numbers from a session Eric and the boys did with blues great Freddie King.

As many followers of Clapton’s life know, when he set foot in Miami’s Criteria Studios to record 461 (named for the actual address of the rented beach house the band stayed in), he was at a “crossroads” of his own.

After the huge success of 1971’s Layla and Other Assorted Love Songs and the subsequent drug-and-ego fueled collapse of Derek and the Dominos, Clapton spent three years holed up in his mansion with his girlfriend, becoming a heroin-addicted recluse who rarely even picked up a guitar.

Friends like the Who’s Pete Townshend would try to get him interested in playing again – organizing the fabled Rainbow concert partially for that purpose – and Dominos bassist Carl Radle would play Clapton some of his demos and live tapes, which featured Oldaker.

Still, as Clapton worked to pull himself together, the band that assembled at Criteria (under the direction of producer Tom Dowd) had no idea what to expect.

“I knew who Cream was, but I wasn’t sure about who Eric Clapton was so much. But Carl talked me into being in the group, and I jumped on it, even though I had to quit my job with Leon Russell’s band,” Oldaker recalls.

What Radle, Oldaker, and some of the other musicians – including guitarist George Terry, keyboardist Dick Sims, and backing vocalist Yvonne Elliman – found was an Eric Clapton who was not at all interested in revisiting his burning guitar-like “God” status, but a man who was in the middle of a musical 360.

And while there were some blues workouts (“Motherless Children,” “Steady Rollin’ Man”) the laid-back, calm, lolling vocals and music on 461 tracks like “Please Be With Me,” “Let it Grow,” and the box set’s title song was something of a shock to many.

“That type of music was the way we played it in Tulsa, so it wasn’t [new] to me. And Eric was not in the greatest shape to do fiery guitar solos, we all know the stories. He’s always said he just wanted to be a guitar player in a band and not the front guy,” Oldaker says.

He adds that most of the songs on the record, were “created on the spot” in the studio and the result of jamming and collaboration. But the song that came to define the record – and give Clapton one of if not his biggest solo hit which hit #1 – almost never got released.

Jamie Oldaker with a friend in 2008. Courtesy Jamieoldaker.com

George Terry had started adding some reggae strummings to his guitar work, and gave Clapton a copy of the then-current Bob Marley album Burnin’, which included the song “I Shot the Sheriff.” The group decided to tackle a cover.

“You have to understand at this time that Bob Marley wasn’t really known, and reggae music had not really made it further than outside of south Miami. We recorded it, but Eric didn’t want to release it because he didn’t think we’d done justice to the original,” Oldaker remembers.

“But the record company wanted it out and in those days, they prevailed. And obviously, they made the right decision!”

As for the home, which gave the album it’s name and is featured on the cover, Oldaker has nothing but fond memories.

“We did a lot of drinking, a lot of partying, and we had some equipment set up. But we’d mostly play in the studio, going in about 6 p.m. and staying until the early morning,” he says.

“Then we’d get up, sit in the sun by the pool and talk songs. We had cooks, food, everything came to us. We didn’t have to go anywhere! I was 22 and started realizing what all this [rock and roll lifestyle] was!”

The album was released in July, and the band hit the road. They knew full well that Clapton’s return to live performances would be scrutinized and fans would demand to hear a heaping helping of the louder, more rock-oriented tunes like “Badge,” “Crossroads,” and “White Room.”

“Eric’s repertoire is quite large, so played all kinds of things, both from the new record and older songs,” Oldaker says. “But Eric was not in the greatest of shape, and there was a lot of drinking going on. And the press killed us. We would open with ‘Smile,’ a ballad [co-written] by Charlie Chaplin, and people didn’t know what to make of it at first.”

After the tour, the band reconvened in Jamaica to record the follow-up, There’s One in Every Crowd. The material was not inspired as 461, and after that April 1975 release, they hit the road again. The expanded E.C. Was Here combines material from both tours. And put together, the three records set the template for Clapton’s highly successful solo career, still going strong today.

In the years after, Oldaker would continue to tour and record with Clapton, appearing on more than 10 records. He says the pair are “still good buddies,” and saw each other last September while working on a tribute record for the recently deceased J.J. Cale.

Cale’s work would be a huge acknowledged influence on Eric in the ‘70s (they finally did an album together in 2006, The Road to Escondido). And in fact, Oldaker says it was in Jamaica that he himself introduced Clapton to the work of the Oklahoma singer/songwriter.

“I told Eric that I was really proud of him that he’s gotten through all the [challenges] he’s had in his life. And now he has a family…and plenty of money!” Oldaker laughs. “And he still has an incredible, mischievous sense of humor. He’s a stand-up tall person that I’ve been glad to know for 40 years.”

As for Oldaker himself, he is currently working on his autobiography (which he hopes to take on the road next year with readings and a multi-media show) and is actually heading to Austin – where he lived for some years – to record with bluegrass legend Peter Rowan.

“I’m excited to get there and have some Texas barbecue again!” he laughs, while remembering his Texas concerts with Clapton over the years. “People may not realize that. After the show, a big concern of ours was always ‘Where are we going to eat!’”

I am a passionate fan of classic rock (and related music) with nearly 30 years experience writing about it for daily/weekly newspapers and magazines. I am also the author of "Slippin' Out of Darkness: The Story of WAR." Available on Amazon!
View all posts by Bob Ruggiero →
This entry was posted in Eric Clapton. Bookmark the permalink.