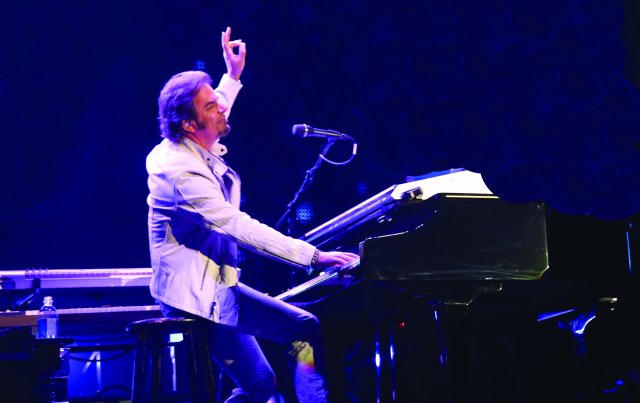 Jonathan Cain with Journey recently. Photo courtesy of Zondervan.You could practically hear the piercing screams of millions of HBO viewers across the land on the night of June 10, 2007 as they were all wondering the same thing: How could my cable tv cut out now??

That’s when we last saw New Jersey “sanitation engineer” Tony Soprano at Holsten’s Diner waiting for his family. He punches in Journey’s “Don’t Stop Believin’” on the booth jukebox. Wife Carmela arrives (perhaps the 1981 number had special meaning for the then-young couple?). Onion rings are ordered. Son A.J. takes a seat. Daughter Meadow can’t park the car outside. The song builds to a crescendo. Then that shifty guy in the Members Only jacket passes by. Is he a customer or an assassin? The front door bell rings. Tony looks up. And just as singer Steve Perry utters another emphatic “don’t stop,” the song and screen cut to black silence.

Also watching that night with anticipation was Jonathan Cain, longtime Journey keyboardist and co-writer of “Don’t Stop Believin’” More than a decade later, he says it was at that moment he realized that the song had gone from just being a hit or even huge hit for the band to another level of anthemic status. 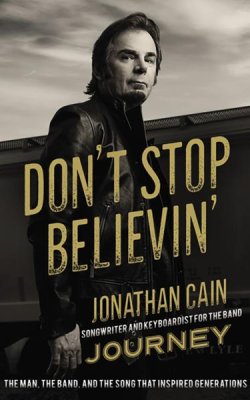 “That hit me profoundly. Then [Sopranos creator/producer] David Chase announced to his team that song was going to end the show, everything changed. All of a sudden, it wasn’t just a pop song. It had deeper layers to it, and you felt it. All those lyrics had meaning, it just transcended everything.”

Cain did have an inkling what was coming – he said that producers had asked his permission a year before the show aired to use the song. Then “Don’t Stop Believin’” appeared in both the stage show and film Rock of Ages and as a central theme of an episode on TV’s “Glee.” Today, that tune about the hopes and dreams of a small town girl and a city boy getting on that midnight train to anywhere is a metaphor for a whole lot more.

“I wrote that song about the ‘70s, but its appeal seems to span generations. And it’s unique – it represents all of what Journey is,” Cain sums up. “When we played that song at first, kids would push to the front of the stage and want to sing. And I thought it was strange. What was it about that particular song?”

Jonathan Cain’s recent memoir is not surprisingly titled Don’t Stop Believin’ – The Man, the Band, and the Song That Inspired Generations (304 pp., $26.99, Zondervan).

The book traces Cain’s story from child accordion player for his Chicago-area Italian neighbors (his given last name is Friga), to surviving a devastating fire at his parochial school that killed nearly 100 classmates and several nuns, through his early solo career and time with the John Waite-led group the Babys.

A little over halfway through the book, Cain joins Journey as keyboardist and songwriter, writing “Faithfully” and co-penning hit like “Stone in Love,” “Only the Young,” “Who’s Cryin’ Now,” “Chain Reaction,” and one of rock’s greatest ballads, “Open Arms.”

Cain first performed the melody and chorus at his wedding, before finishing it off with Steve Perry years later. Though – like Dennis DeYoung, Peter Cetera, Kevin Cronin, and Peter Criss before him (in Styx, Chicago, REO Speedwagon, and KISS respectively), some of his more rockin’ bandmates were hesitant to record a mushy love song.

“Steve loved to sing ballads and wanted to do more of that. I first offered it to John Waite when I was in the Babys, but he didn’t want to sing it. But Perry loved it and we quickly finished the song in an afternoon and brought it to the band, and they said ‘what??’” Cain laughs. “But Perry had a conviction to go in a different direction. He’s a romantic at heart, and so am I, and the rest is history. It was one of the biggest singles we ever had.”

Journey also came of age at the height of MTV and their videos were in heavy rotation, even if their non-live in concert ones were sometimes head-scratching. Exhibit A has the five members frolicking around a shipping dock and miming their instruments to “Separate Ways.” Cain can still cringe at the memory of that one.

“We weren’t very fond of it, and we didn’t go about it the right way. Steve Perry used to say people have their own movie of what a song is in their minds, and it’s wrong for a director to stick something on a screen and say what it means,” he says.

“We did it on a very inexpensive budget and didn’t know what we were doing. Then Beavis and Butthead spent three years ripping it apart! Do I want to be remembered for playing air keyboard? No. It’s great if you were exposed to the band because of that video, but the song is bigger than that. I hope its gets a decent shot in a movie one day!”

Cain has much more pleasant memories of filming the full length 1981 concert Journey: Live in Houston – The Escape Tour at the Summit. It found the band at the cusp of the massive success that their next album Frontiers would bring, and was commissioned by and shown constantly on the then-nascent MTV channel.

Neal Schon, Steve Perry, and Jonathan Cain with Journey back in the day. Photo courtesy of Zondervan.

“I can tell you the promoter was Robert Duncan. He and his wife were huge fans. I can remember not even thinking about the cameras – we were just clicking on all cylinders. I don’t think I was nervous at all,” Cain says. “But I thought it was as going to be cool. The world was going to see what Journey had become. The concert still holds up for me. We were good.’”

Next to music, the other main thread that runs through Cain’s book is his relationship with God and religion. Though he actually wanted to be a priest when he was younger, Cain maintained an on-and-off again relationship with the Lord for most of his life. That was until a few years ago when he became born again under the guidance of Pastor Paula White, the Florida-based Pentecostal evangelist who became his third wife.

White has also been a spiritual advisor to President Donald Trump. And when Cain and two members of the group visited the White House last year, it caused a public dust-up with Journey guitarist Neal Schon, who at one point floated the ideas of forming a new version of the band with just him. That conflict seems to have calmed down for now, but Cain is straightforward and makes no apologies for how he lives his life. 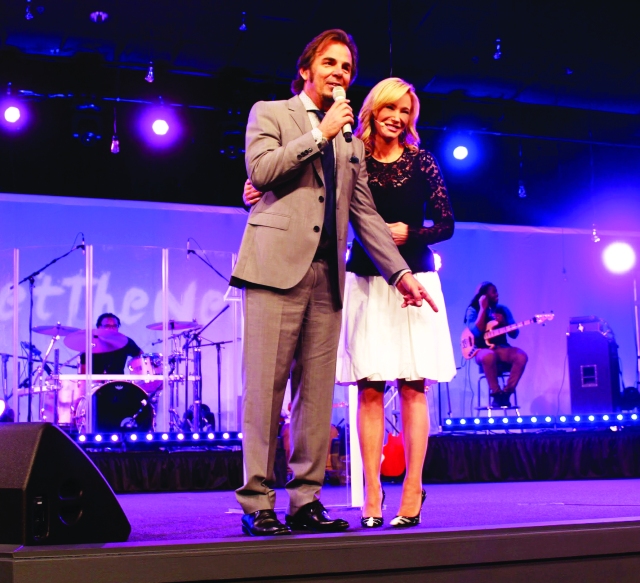 “I am putting God first. A lot of us Christians think it’s a part time situation where you can come and go with God, and it doesn’t work that way,” he says. “I believe I had to get to being a broken guy and not knowing who I was when I looked into the mirror anymore and just surrender to Him. Some Christians just dabble in faith, but I believe the Lord takes his hand off you at one point and says ‘I’m done with you.’ It’s a two way street.

“There’s a love exchange that happens between God and Man,” Cain continues. “I believe that if you give God love and goodness, He fills you back up. I was missing that part, and I was able to find it again. I’m not trying to convert everyone to Jesus Christ at all, but it’s never too late to return to Him.”

The long held desires of Journey’s hardcore fan base came to fruition finally last year when the group was inducted into the Rock and Roll Hall of Fame on the heels of their winning the fan vote. Even casual listeners waited to see of Steve Perry – who hadn’t sung with the band since his dismissal over 20 years earlier – would take the mike for their mini-set. But he ultimately did not, and current singer Arnel Pineda (whose own entry into the group was the subject of its own documentary) raced out on stage.

“I didn’t rule it out the idea that Steve would decide to sing. We did a sound check rehearsal and I kept looking for him in the wings, but he declined to do it,” Cain says. “I can’t speak for him, but I thought what he said in his speech was so profound. I think he felt the fans missed him, and just having him onstage with us was great.”

As for Journey’s future, the group – which features four of its five classic member lineup (also including bassist Ross Valory and drummer Steve Smith) – just completed a massive summer with co-headliners Def Leppard with Tesla opening. He says that their set list for this type of show will pretty much stick to the hits, but he hopes the tour results in some fan cross-pollination.

A highlight for sure will be when Cain begins playing the electric piano opening to his most famous song that will cause the audience to roar. And like he does most nights, he’ll be thinking of that song’s actual inspiration: the three words that came in a letter he received from his father at a low point early in his career when he thought of giving up pursuing a musical career: Don’t stop believing.

“My father was my vision keeper. When he saw I could sing any song on the radio and play boogie woogie piano when I was four and was a ham, he got me lessons. And he supported me every step of the way,” Cain recalls. “And he did that with all of his sons. He was an astute man, and I try to do that with my children. I’m constantly cheerleading for them.”

I am a passionate fan of classic rock (and related music) with nearly 30 years experience writing about it for daily/weekly newspapers and magazines. I am also the author of "Slippin' Out of Darkness: The Story of WAR." Available on Amazon!
View all posts by Bob Ruggiero →
This entry was posted in Journey and tagged Jonathan Cain, Journey. Bookmark the permalink.