The Paul Butterfield Blues Band with guest guitarist Mike Bloomfield runs through a blues at their sound check prior to the New Folks concert at the Newport Folk Festival.Photo by Dr. John Rudoff/Courtesy of University of Texas Press

At one point in the mid/late ‘60s, Michael Bloomfield was considered by many as the country’s premiere blues-rock guitarist, seamlessly meshing the traditions of the genre’s past with the louder inclinations of the counterculture. Yet a combination of erratic career moves, a tendency to quit projects, lethargy, manic behavior, fear of competition, and a predilection for substance abuse (mainly heroin) derailed all of that.

Today, his name is mostly known to music nerds, despite being ranked as #22 on Rolling Stone’s list of 100 Greatest Guitarists of all time. But in this exhaustive, detailed doorstopper of a tome, Dann tells the troubled player’s story through research and more than 70 interviews with friends, relatives and bandmates, but explores seemingly every nook and cranny of his music.

The Chicago-born, upper class Bloomfield was first exposed to blues at a young age by his family’s housekeeper’s radio. At 14, would travel alone at night on city buses or rail cars to go to the heart of the south side of Chicago and try and catch players like Muddy Waters and Howlin’ Wolf at mostly black clubs like Pepper’s Lounge – listening outside when he couldn’t get in. In just a few years’ time, he’d be sharing the stage with both men. 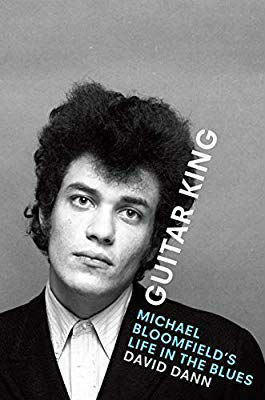 The teen became so obsessed with listening to and then learning to play the music – at the expense of school, family, and “normal” life – that his conservative, emotionally distant businessman father had him committed to a psychiatric hospital for evaluation.

But word was getting around about Bloomfield’s explosive guitar playing, and it was his work with Bob Dylan on two projects that brought him to national attention. That’s his lead guitar on the unlike-anything-else “Like a Rolling Stone” (and other Dylan tracks like the stinging lines on “Tombstone Blues”).

And his controversial appearance backing Dylan at the Newport Folk Festival in 1965. As Dann points out – what history has since etched in rock history as The Time Dylan Went Electric, they are really referring to Bloomfield’s playing during the short set, which was a lot wilder and louder than the frizzy-haired Bard of Hibbing’s.

Shaken and never able to sit still in life or career for much time, he quits Butterfield just as they are about to break big. And his self-doubt about his legitimacy as a white man playing a black man’s music is exacerbated when a Rolling Stone columnist (unfairly) accuses him in print of “shucking.”

Then there were the lifelong medical issues. The mile-a-minute talking Bloomfield today surely would have been diagnosed as bipolar or with ADD. He also suffered from severe and debilitating insomnia, which led him to constantly frying his senses.

Dann then begins to detail decades worth of starts and stops for Bloomfield, during which he is his own saboteur. He forms the politically charged rock/pop act with horns the Electric Flag, only to cede leadership to his showboating singer/drummer Buddy Miles, and then quits.

When friend/keyboardist Al Kooper invites him to play on an experimental jam session record, Bloomfield quilts during recording, disappearing in the middle of the night and leaving Kooper a note that said “Dear Alan, couldn’t sleep, went home, sorry.” Kooper frantically recruited Stephen Stills to fill out the other side of the album. Ironically, 1968’s Super Session would be his greatest commercial success, but also an albatross that framed fans’ expectations.

Michael Bloomfield solos in February, 1973 at the Winterland Ballroom.Photo by Jonathan Perry/Courtesy of University of Texas Press

Periods of isolation would follow, as the guitarist would shut himself in his house, play a little, shoot heroin, and watch endless amounts of TV (sitcoms and “The Tonight Show” were his favorites). His mother was concerned enough that she went to a B.B. King show and managed to get backstage to ask the blues star (and her son’s musical hero) to call and cheer him up. Which he did.

Dann recreates the guitarist’s final hours, the likely scenario that Bloomfield went to a party hosted by his drug dealer, took some mixture of narcotics that left him unresponsive and turning blue, after which partygoers put him in his vehicle, drove several miles, then left him in the front seat to be found.

“I’m a musicologist as much as a player,” Bloomfield would say in one of the last interviews he would ever give. And indeed his enthusiasm for other’s work over his own is seen throughout this book. But with Guitar King, the spotlight is absolutely on the subject, a wealthy, Jewish kid who just wanted to play the blues.

This review originally appeared at HoustonPress.com

I am a passionate fan of classic rock (and related music) with nearly 30 years experience writing about it for daily/weekly newspapers and magazines. I am also the author of "Slippin' Out of Darkness: The Story of WAR." Available on Amazon!
View all posts by Bob Ruggiero →
This entry was posted in Michael Bloomfield and tagged Blues, David Dann, Michael Bloomfield, University of Texas Press. Bookmark the permalink.